The Western Peacock - by Taz Cullen

In the three months I have been living in India, I have been taking dance at Raack Dance Academy, a studio about 10 minutes from our apartment. 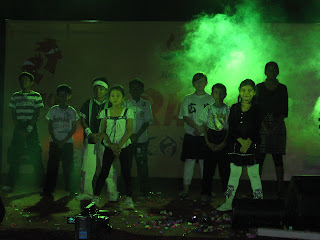 My class is not Classical Indian Dance, but “Western Dance,” meaning we dance to music by artists like Michael Jackson. Sometimes we also dance to Bollywood music. The class meets three times a week. We performed on stage in October in a show put on by Raack. My class did a dance to Michael Jackson’s song “Black or White.”

When I went to my regular class last Wednesday, we were asked to perform our “Black or White” dance for an agent from Vijay TV. Vijay is a music television station in Chennai. After we danced, he picked ten of us to come back and audition on Thursday. I was one of the lucky ones picked! On Thursday, I had to be there from 4:00 p.m. until 7:30 p.m. for auditions and practice. At the end, I got picked! I still didn’t even know what I was being picked for! On Friday, I went for four hours of rehearsals! I found out then that our group would be dancing for the opening act of a Vijay TV show called “Super Singer Jr.” It is a show like American Idol, except the contestants are kids. I was really excited, because we would be on TV in India! 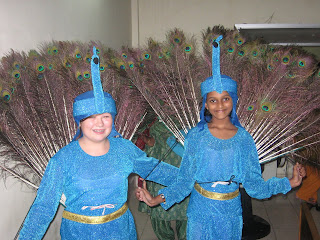 Little did I know how much work would be involved! On Saturday, we had six hours of practice! And this was during the huge monsoon in Chennai, so we had to get to Raack in an auto-rickshaw in the pouring rain. By Saturday afternoon, we still didn’t even have our costumes, but I knew I was going to be dressed like a peacock! Some of the little kids were going to wear flower costumes, including three of the boys! On Sunday, my dad and I had a really long day. We went to Raack at 8 a.m. (in the pouring rain again) and from there went to the Vijay TV studio. The TV studio was not at all what I expected!! It was moldy and funky-smelling, the changing room was smaller than a regular-sized bedroom, the bathroom did not have running water, and there were only 20 seats for the audience! 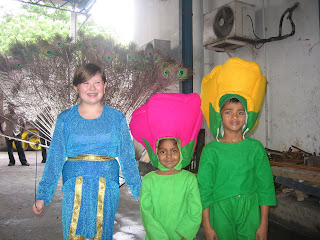 I put on my peacock costume, which was pretty cool. We were there for about five hours, but we spent way too much time waiting around. We only ran through our dance three times to practice, and when we filmed it for the camera, it took five takes to get it right. But the hostess of the show could not memorize her lines, so we had to keep waiting until she got it right! Once we were finished performing, we had to exit through this tube-like tunnel, but when we got into the area that was hidden from the audience, it was really creepy, with dirty tarps, broken glass and wires hanging everywhere! There was nothing glamorous about this studio!

It was an interesting experience overall, but I won’t be going back to Vijay TV studio any time soon!