I feel like we’ve been waiting for the famous Northeast monsoon for weeks now. 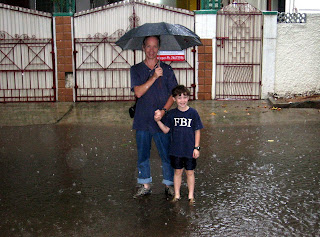 There was a lot of talk here in October, about how it was a much hotter month than usual (i.e. 95 degrees Farenheit instead of 85!), because the monsoon had not yet come. Then predictions of the upcoming monsoon were in The Hindu newspaper- first it was October 20 (conveniently right after Diwali), then October 26, and then it was just “coming.” Now it is finally here.

So what is a monsoon? According to the Internet, it is a seasonal wind in southern Asia, which blows from the southwest in summer and from the northeast in winter, bringing rain with it. The monsoon season is different all over India. On the west coast, in Kerala, the season is usually in September. In the states of Karnataka and Andhra Pradesh, it was in October, when there was massive flooding. As much trouble as the monsoon causes, it is desperately needed for filling the reservoirs and for agriculture; some states receive up to 80% of their rainfall for the whole year during monsoon season. When we asked people here about the monsoon in Chennai, we were given a variety of answers, in terms of when it would arrive and how long it would last. As a result, we didn’t know if it would be more like a “rainy season” or if it would rain continuously for days on end. I’m thinking now that it might be the latter.

On Monday and Tuesday this week, the rain was fairly heavy at night and in the morning, but it cleared up by mid-afternoon. 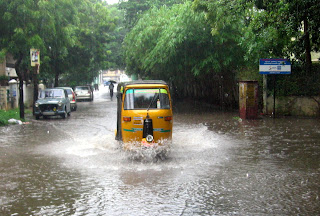 Not too bad, I thought – certainly not any worse than a few days of spring rain in Wisconsin. But then on Thursday night it started raining, and raining, and . . . raining. When we went out to catch our usual auto-rickshaw to school on Friday morning, our street was flooded in ankle-deep water. At one point during the commute, traffic at the intersection was unbelievable, with cars, auto-rickshaws, and motorcycles jumbled up in all directions, while a few hapless civilians tried to direct traffic without being run over. 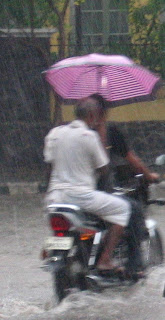 Few people wear raincoats or rubber boots here; most still dress as they usually do, though there were a lot of men and women with plastic bags on their heads! Although our street looked like a small river, our neighborhood was not hit as badly as some of the others; we heard tales of roads closed, knee-deep water, and two-hour traffic jams in some parts of Chennai.

Friday and was declared a holiday for all government schools in Chennai due to the rain. Unfortunately for our kids, who were hoping for a “monsoon day,” Vidya Mandir was still in session. It continued to rain all night and then all day on Saturday, with the roads getting progressively worse. We had already bought movie tickets for Saturday evening, so we braved the pouring rain, got soaked riding in an auto-rickshaw, and barely made it home, as it was slow going in the deep water. 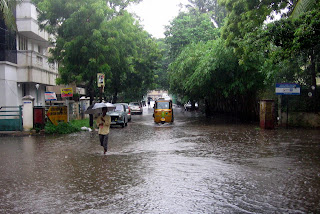 Now it is Sunday evening, and the rain has let up a little, but we’re still very leery of what is to come. And the kids are still hoping for a “monsoon day!”

Posted by Carla Luna Cullen at 6:43 AM