Temple Towns of the South 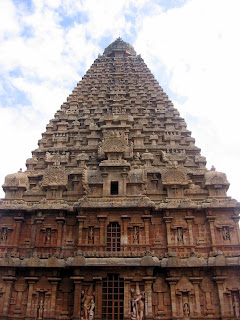 Time for vacation again! This time, our family was headed south to Pondicherry, for the Fulbright Conference. We were all excited to go, as the conference would give us a chance to re-connect with the five other Fulbright Exchange teachers posted in India and hear about all their adventures. Since we had a few free days before the meetings began, we decided to check out some of the famous Hindu temples of the South. Unlike North India, which was heavily influenced by various waves of Muslim invasions, the South was dominated by regional dynasties and developed its own unique religious and political institutions. The most visible legacy of these dynasties is their amazing temples, noted for their gigantic gateway towers, or gopura.
On Saturday, joined by fellow Fulbright teachers Evelina and James (who had flown in from Delhi and Mumbai, respectively), we flew out of Chennai to Tiruchirapalli (also known as Trichy, which is far easier to pronounce and spell!) in central Tamil Nadu. Due to flight delays, we did not actually get to our hotel until midnight. The kids are getting more used to travel in India now, as they barely complained about the late hour or the long wait for an extra bed and towels for our room.
Our first stop was the Ranganathaswamy Temple in Srirangam, noted in one of our 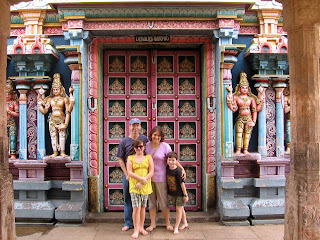 guidebooks as “the largest temple complex in India.” It was truly huge, composed of seven walled courtyards, covering more than 120 acres. We entered through an immense and very colorful gopura, which was crowded with a stunning array of carved Hindu gods, goddesses, and mythological figures. It is interesting to note that the temples are not just beautiful tourist attractions (for foreigners and Indians), but active prayer sites, and we saw a number of pilgrims performing puja, including small children with shaved heads. We declined the offer of a local guide, preferring instead to wander around on our own and absorb all the wonderful details. 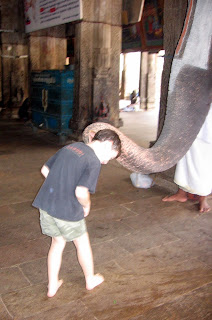 The kids were very excited at the appearance of the temple elephant, who had a neat trick: if you placed a coin in his trunk, he would scoop it up, give it to his handler, and then pat your head with his trunk as a blessing. James was blessed three times, so we figure he’s covered for luck. After Srirangam, we went on to the Rock Fort, which entailed climbing up 400 steps (James counted, and it was actually only 364). The view was pretty awesome, as we could see the gopura at Srirangam towering above all the other buildings in Trichy. James’ elephant blessing must have worked in our favor, as the rain held off until we were finished sightseeing in Trichy and headed to the next town, Thanjavur (also known as Tanjore).
In Tanjore, we stayed at a wonderful resort on the Cauvery River. We had a truly memorable swim at 7:00 p.m. that evening, in total darkness, as soft rain fell intermittently. Despite the rain, the air temperature was still in the 80’s and the water was even warmer! We were warned there were snakes on the paths, but all we saw was a lone frog, sharing the pool with us. 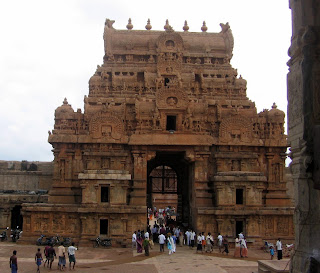 In the morning, we went on to the Brihadishwara Temple (also known as “the Big Temple”) in Tanjore. This was another stunning monument, made of reddish sandstone, with two gopura gateways, a huge courtyard, a main temple building, and a pavilion containing the second largest Nandi (a bull, the vehicle of the god, Shiva) in India carved out of a single piece of black stone. Inside the temple wall was a passageway containing beautiful frescoes and Sanskrit carvings. Taz was able to recognize some of the letters, thanks to her Sanskrit classes at Vidya Mandir. 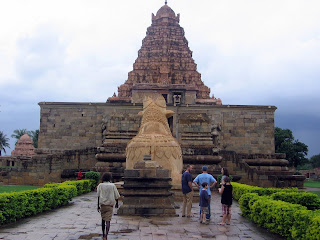 Our final temple stop, on the road from Tanjore to Pondicherry, was at the awesomely named (take a deep breath, now) Gangaikondacholapuram. Unlike the other temples, which were crowded with pilgrims and families, it was very peaceful here, with only a few visitors and some pigeons and parakeets among all the carvings. As luck would have it, the rain started up again, just as we were leaving. Our drive took us through some lush scenery – palm trees, rice paddies, rivers and backwaters – a wonderful glimpse of the interior of Tamil Nadu. Even though we only saw a fraction of all the temples spread out across this region, we came away with a much greater appreciation of them, both for their artistic elements and their powerful spirituality.
Posted by Carla Luna Cullen at 4:55 AM