I am surrounded by suitcases, piles of gifts, and books to be sorted through. 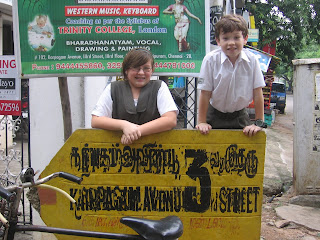 Mike and the kids are at school and I am faced with the daunting task of packing everything up, as we leave Chennai in two days, on Christmas Day. I am filled with a sense of excitement to be going home, and a slight wistfulness, as I will miss our apartment and our life here. On the occasion of our imminent departure, I thought it only necessary that I give the city its due. Because, after four months of life here, I have come to like Chennai far more than I thought I would.

When the Fulbright committee first informed us, back in March, that we might be assigned to Chennai, the first thing I did was grab my world atlas and look for the city. I had no luck finding it, leading me to believe that it must be a tiny village, too small to merit a dot on the large map of the Indian subcontinent. However, after a quick Internet search, I found out that Chennai was not a small village, but a bustling city of over six million people, located in southeast India, on the Bay of Bengal. The reason I had not been able to find it was because it was formerly known as Madras until the 1990s. When I had the chance to peruse the travel section of our local bookstore, what I read about Chennai did not inspire me. The guidebooks pointed out its lack of tourist attractions, and one book wrote that it was “polluted, crowded, and muggy.” Although these books did not instill a feeling of confidence in me, we accepted the posting nonetheless, as we thought it would still be exciting to spend five months living in India. I am so glad that we chose to come. In fact, as far as postings go, Mike and I think he got one of the best assignments.

So what is it I like about Chennai? Perhaps it is the tropical vibe – the coconut palms and flame of the forest trees, the huge expanse of Marina Beach, and the bustle of life all around me. 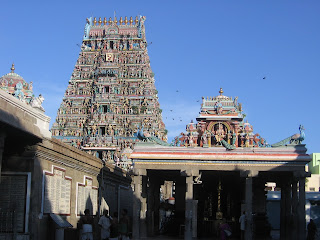 In many ways it reminds of Los Angeles, a city near to my heart, because of the beaches, the palm trees, and the crazy traffic. On the one hand, it is a city full of Western conveniences, be it Pizza Hut and KFC, movie theaters that show English-language blockbusters, Levis stores, and video game arcades. On the other, it is a city still steeped in tradition, where religion is an integral part of daily life. During our morning auto-rickshaw commute to Vidya Mandir school, we pass by the huge Kapaleeshwarar temple, a dominant landmark in the Mylapore district. 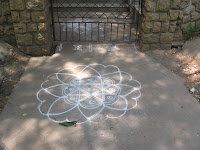 All around it are women sitting along the curb, selling garlands of jasmine and marigolds, which will be bought by the people going to the temple to do puja (prayer). Many of the doorsteps we pass by are freshly decorated with kolam - patterns made from rice powder -which have decorative as well as religious purposes. 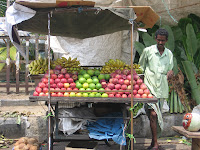 The morning ride is never dull, and my senses are always full of sights and sounds – wooden carts piled high with pyramids of limes, bananas and apples; green-uniformed sweepers cleaning up the streets; coconut vendors; women selling freshly caught fish and prawns; men on bicycles carrying everything from buckets to huge tins of filter coffee, and children of all ages, in their various colored uniforms, walking to school or riding with their parents on motorcycles.

I was told, after arriving here, that the people of South India are far more hospitable than those in North India. I cannot vouch for the north, as we were only in Delhi for four days, but I would definitely agree that the south is a welcoming place to be. 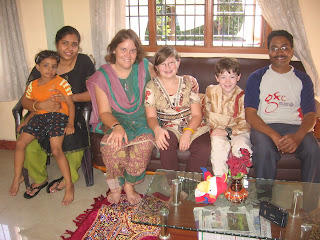 Throughout Tamil Nadu, we have found most people to be friendly – if someone approaches us at a temple or a tourist site, it is usually not to harass us, but to ask us where we’re from, how we like India, and inevitably, if we will pose for a photo with them. The people we have met during our stay here, especially the teachers at Vidya Mandir, our Tamil instructor, my yoga teacher, and James' keyboard teacher, have made us feel very welcome in this country. Although this trip is meant to be an exchange, I feel like we can never properly reciprocate the generosity we have received, unless people choose to visit us in the U.S.! 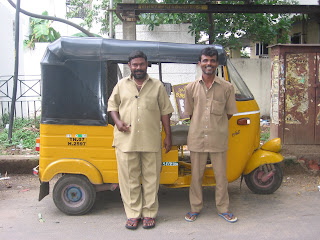 When I have gone out to explore Chennai on my own, I have never felt threatened, even though Western women are not a common site. Most people let me go about my business, without any hassles. I was warned that the auto-rickshaw drivers would try to cheat me at every turn, but most of them have been fair. The drivers at our auto-stand at the end of Karpagam Avenue 3rd Street always greet us cheerfully, and have even come down the block to pick us up during the monsoon, when our street turned into the “Karpagam River.”

I also feel fortunate that we were given such a great place to live. 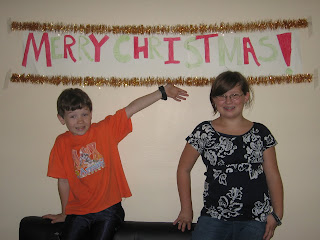 Our apartment, which is now decked out for Christmas, has been very comfortable and centrally located. We also really like our Karpagam Avnue neighborhood. On the corner are James’ keyboard classes, the local grocery stand, and a South Indian vegetarian restaurant, which sells awesome samosas and onion bajji (onion rings). Down the block, we have the bustling Santhome High Road, with our favorite afterschool hangout, 36 Degrees (with the unusual slogan “At 36 Degrees U go Minus”), where we get brownies, French fries and awesome banana milkshakes. The delivery guys at Sangeetha (vegetarian restaurant) and Hotel Marina Park (non-veg, with great chicken tikka) know our address by now, and can be here in twenty minutes. School is a ten-minute auto ride away, in Mylapore, where you can buy just about anything, super cheap from the Luz shopping district. It is a fun, interesting, colorful place to be, and visually, there is rarely a dull moment.

So I think the guidebooks were wrong. Perhaps, if you were just passing through for a day, you wouldn’t notice the city’s charms, and you would have no desire to linger. But as for us, after four months here, we feel like we couldn’t have chosen a better place to stay for our life in India.